As you know, Prince Harry and Meghan Markle stepped back from the royal family, which depicted Meghan as this villainous figure trying to break up the royal family. People have disliked Meghan since before she got married to Harry, I’m not sure whether the reason is race, her history and fact she’s an actor or just her overall but one thing I do know is I have heard nonstop gossip and rumours about her and how ‘bad’ she is when really no one has ever heard what she has to say.

Oprah recently did an interview with Meghan and Harry and this is where Meghan finally got to say her piece. 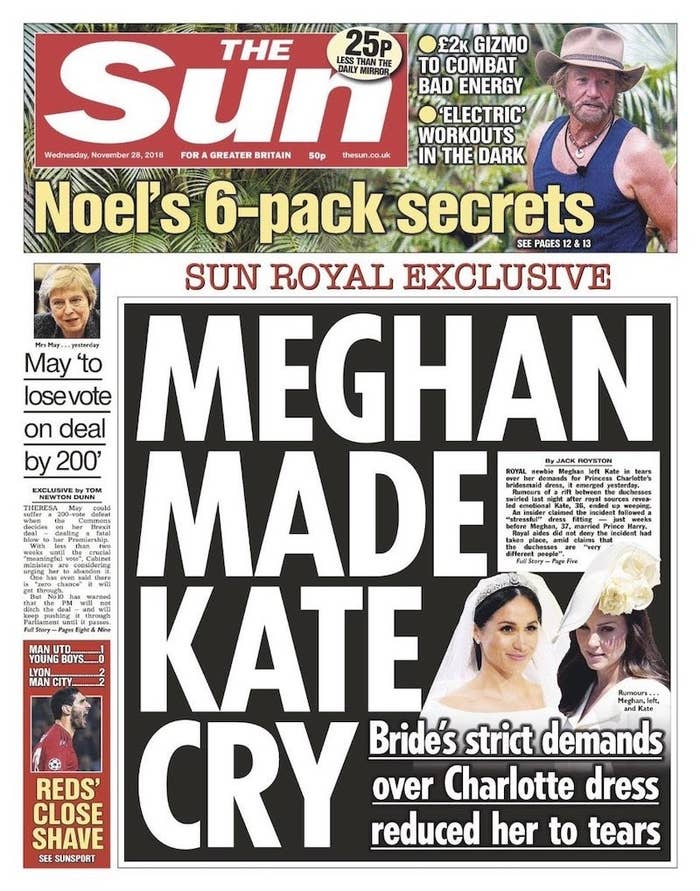 In the interview, the rumour that Meghan made Kate cry before the wedding, which circulated like crazy, was brought up. Meghan cleared this up, explaining that actually this was not the case at all and the reverse actually happened where Kate had made Meghan cry. Kate had apologised and Meghan forgave her, over a small mishap. A mishap that any pair of people could have; it wasn’t deep or enormous. However, six/seven months after the incident, the rumour was spread and in my opinion, I think this to be the classic case of the media pinning women against each other. Especially women who have such an influence and are held high in society (they’re the royal family!!!). Another thing which was odd was the fact no one, even though there were masses of people who knew the truth, cleared the rumours. Since Harry and Meghan’s wedding, Kate and Meghan have been compared between each other non-stop, almost putting them at competition.

Example of Kate and Meghan being pinned against

One striking question to me during the interview was “Were you silent or silenced?”

Since the beginning of Meghan and Harry’s relationship, Meghan was controlled and told to keep quiet including her family and friends.

Another rumour circulated by the media was that Meghan and Harry didn’t want their child, Archie, to hold title as prince, when in actual fact it was taken away from him as well as security, going against convention. The tradition was kept that each grandchild had the title as well as security but not Archie.

Meghan went on to explain how there had been conversations, before Archie was born, about what the colour of his skin will be, how dark he will be and what that means for the family. That is straight up disgusting! There is not only racism directed at Meghan, being spoken about without her presence, but also an UNBORN baby, innocent and helpless. A baby!

What if he were too brown? Would he be treated better if he were whiter?

The fact that he’s the first baby of a coloured parent and first baby to be excused from tradition is not a coincidence.

Meghan has received so much extreme sexism and racism, articles stating her race and brownness will ‘taint’ the royal family, that she’s a ‘monkey-faced (blank) whore’. With what seems like steps forward having a woman of colour and now a baby of colour in the royal family, we take a million steps back with comments like these and the way they are being treated.

Examples of the racist tabloids

Because of all these horrific rumours, sexism, racism, death threats, Meghan suffered so much with her mental health, struggling with suicidal thoughts, as any person would in this position. And she was completely disregarded, getting no help. Meghan highlights the fact that you never know what someone’s truly going through behind closed doors.

Harry came on and mentioned that the racial discrimination and attacks wasn’t just an attack on Meghan but also on the people she represents, mixed race, black, and even ethnic people as a whole. The royal family, as an institution, didn’t defend or speak up about the racial discrimination, which is shameful, especially as they are placed at such a high status in the world and are a symbol for the UK, which holds ethnic diversity. Their silence speaks so much for those, who are not white, and see where they stand on racism.

Both Harry and Meghan stepped back from the royal family due to lack of support and understanding.

They have created Archewell, a non-profit foundation to “uplift and unite communities – local and global, online and offline – one act of compassion at a time”.

Something a little more light-hearted, but Meghan’s dress features lotus flowers, symbolising rebirth and revival, a resilient reflection on the lotus seed, which can survive for thousands of years without water. A strong flower, if you will. This completely represents Meghan as a person, a strong flower. She has gone through so much and has survived it all and will continue to stand strong.

I hope the interview clears things up and exposes the toxicity that tabloids can have and have had, particularly on this case.

4 thoughts on “When Harry Met Oprah | The Interview”